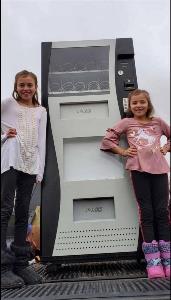 What makes these vending machines unique is their owners -- a pair of pint-sized sisters.

The girls -- along with a little help from their dad Matt -- took the opportunity to become entrepreneurs.

It started a few months ago when they learned that several University of Montana located candy machines were for sale. They bought those and found quick success. They took the profits and bought full-sized vending machines, and started their search for homes for the machines.

“We put an ad out on Facebook and people responded to that," Matt said. "We put two in the mall, and then one of the vending machines that we already had we put it in the barbershop.”

Matt says the original goal of the vending machine idea was to teach them about what it means to run a business.

The girls say it hasn’t been easy, “we stock them, and then we put the change in it, and we have to test it.”

One important decision the girls made was to offer a wide variety of choices, hoping everyone can find something they like.

“We did it healthy because maybe people don’t like sugary stuff, and some do," Ileana said.

So far, so good. Matt says the response from the community has been great, and the candy and vending machines have been a hit.

“Missoula’s been awesome…we’ve had just a ton of support," Matt observed.

The two new mall vending machines will be stocked for the first time Thursday morning and will be ready to go on Friday.

It'll be easy to find Ileana’s and Ellemae’s machines; they’ll have their pictures right on the front.

Ileana and Ellemae hope to take their profits and buy more vending machines but say they also want to set a little aside for a family vacation.

The goal of the Employment Expo at Southgate Mall is to connect Missoula-area...

We have made it easier than ever to take advantage of Retail To-Go with curbside...